I said to myself at the beginning of all of these runs, my life is going to be taken over by training and running, which it has during the week but I’ve come to realise a lot of people can run half marathons but can many say they’ve been to V festival in the same weekend. It’s not about PB’s anymore, I want to be able to look back on these runs and say, that weekend was amazing and I’ve done a half marathon during it – which is a lot more rewarding than just a half marathon on a Sunday morning.

So in my 6 weeks since Southend I have trained hard, I have been promising myself a massage as a half way point treat (I got a tattoo instead) and was CONVINCED Clacton would be my PB…and then a letter came along that changed everything…V.

I have been muttering about going to the festival since the line up was released but nothing ever came of it, until my friend said Becki come to V festival with me on the Sunday. I was like, perfect, I have a run Sunday morning but I can make it work. So Thursday before the weekend comes, looking for tickets and we say to each other…shall we just go both days? Of course we will, so by Thursday evening, weekend tickets were bought along with a VIP upgrade (only the best of course). So on the Friday I was giving myself a pep talk “Becki, your training is going great you can do this, don’t drink and Sunday morning will be fine”.

For Anyone that has been to a festival will know it’s almost impossible not to, you get caught in the moment and alcohol just accidentally falls into your mouth. But I can honestly say it was such a good weekend, and for anyone that knows me I got to see my two favourite people I have never had the opportunity to see live before..Jason Derulo and Sean Paul, so my life is now complete. I’ve been down a slide to get a free chocolate bar, drank far too much & have looked like a fairy pooped all over me but it was an incredible weekend and thank you to Tilly for putting up with me screaming songs in her ear all weekend 💖.

So..Sunday morning, the half marathon. After getting home at 1am eating McDonald’s I was up at 7am to prepare for my run. I had to get all of the glitter off my face, I left the glitter in my hair ready for round 2 after the run & mentally prepare myself for another 13.1 miles.

Clacton is a very interesting place however the beach is beautiful to run along. the coast  line had a lovely sea breeze – until it decided to go about 100 mph making my run harder than it needed to be.

It was a very standard run, along the beach (which was so tempting to jump into and if I wasn’t going back to my festival I 100% would have), up a few slopes off the beach which was a 10 second flashback of the horrors of Keswick and 2 laps of the same route. I had help from my men Sean and Jason when a few of their songs came on I used them as motivation to get my little legs moving to finish the race. The only thing I would say is there isn’t an official running path, so along the shore line we would bump into people sunbathing, eating ice cream, walking the dogs. This was not ok as that’s exactly what I wanted to be doing!

My dad obviously came back for me, but I feel like my patience with him is getting  better, he makes me run which at mile 11 is the last thing you want to be made to do if you don’t want to but he gets me faster times so I’m sorry for shouting at you all the time Dad but you know you deserve it 💙.

Once the race had finished I collapsed on the floor and just thought ‘is Jason Derulo really worth the pain I am going to be in today’. After a minute or so of star fishing on the grass I picked myself up, took my race line finishing photos and went to Tesco to buy my shower…baby wipes 🙈. I was walking round Tesco’s bare foot, picked up some wipes & hairspray and went into the toilet for my wash. I thought this was the most ridiculous idea until a saw a woman who had finished the run doing the exact same! She was 51 so that makes it acceptable, right? 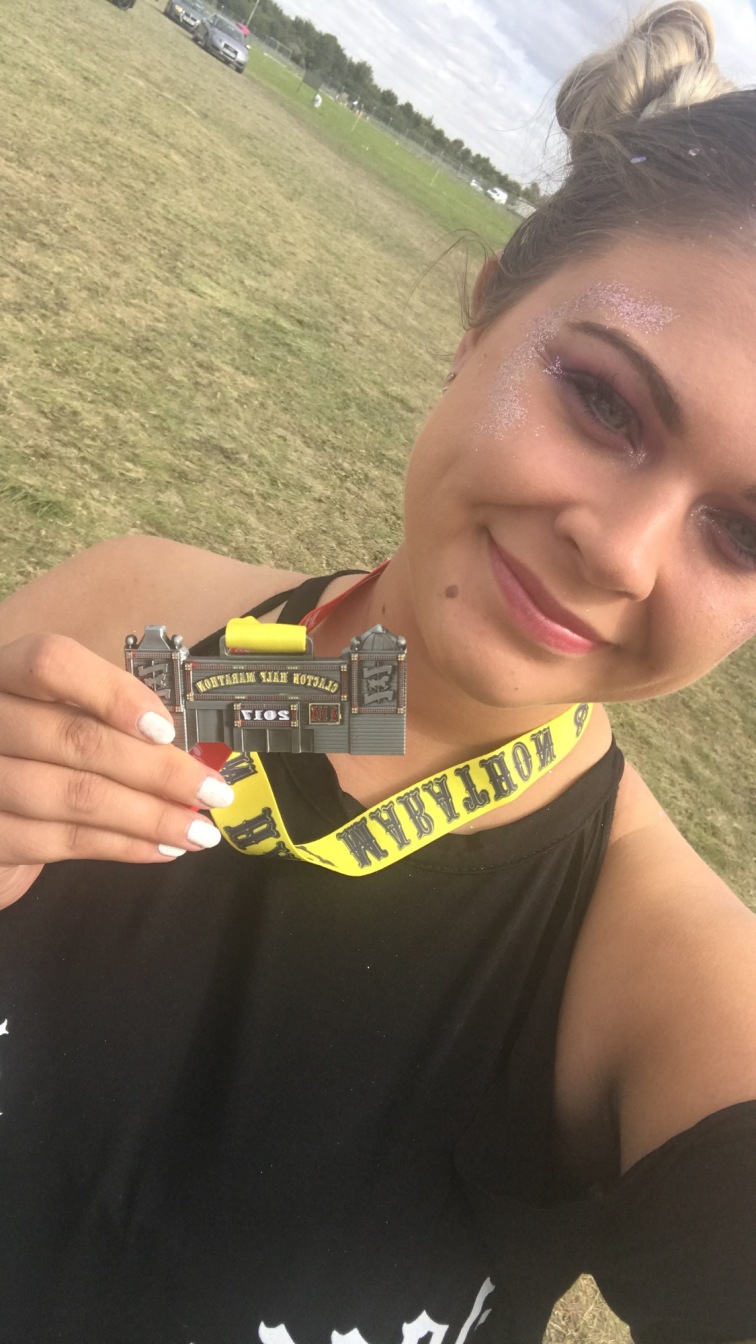 After my wash, I was dressed, in the car and spent the journey back to Chelmsford making myself look like a glitter fairy once again. 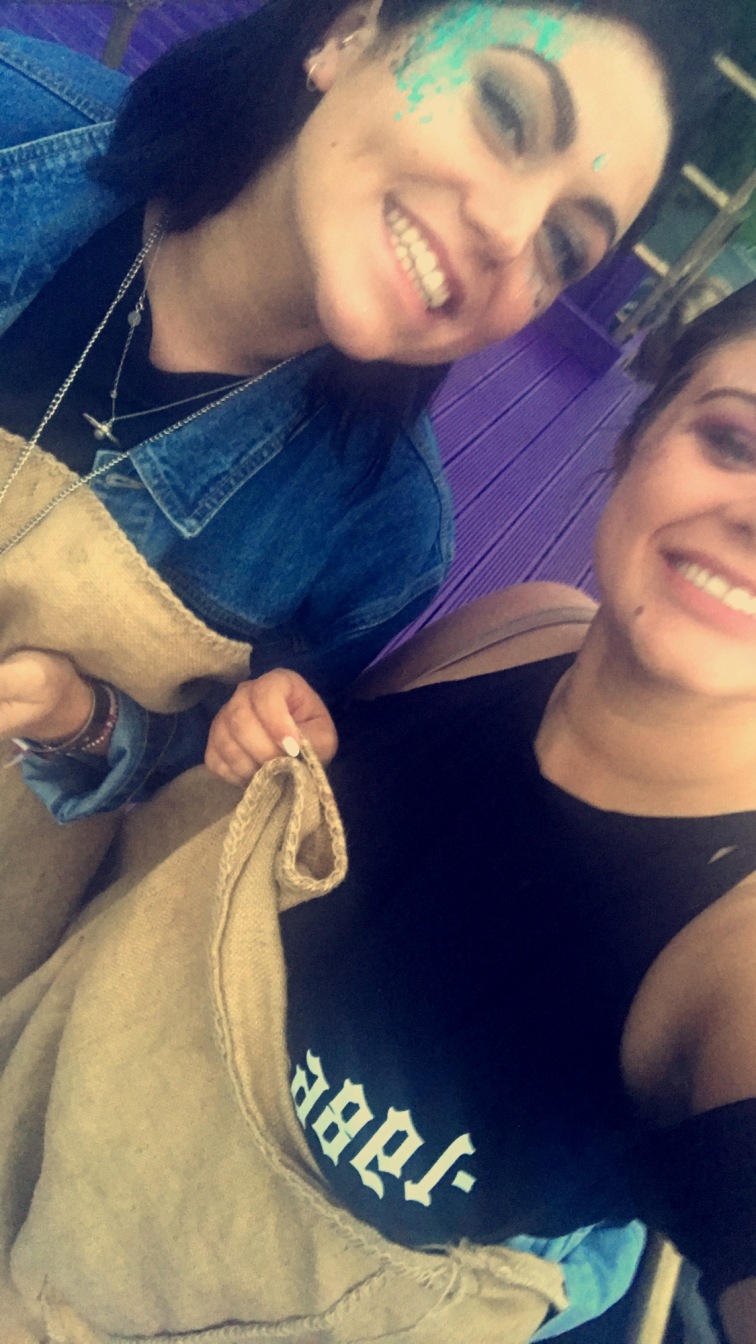 (VIP was that fun I couldn’t keep my eyes open)

The support I have from my family is just amazing, I feel like the luckiest person in the world. They never say to me ‘you could have ran that faster’ (apart from Dad) or ‘it’s time to quit running now Becki’ (which is what I say to myself nearly every day). They always see the positives in everything I’m doing. Saying how proud they are, about how crazy yet amazing I am and remind me even though I am not a runner and never will be, how well I am doing in these 12 in 12 months.

Thank you for an amazing weekend everyone who was apart of it 💖. A pre warning now – the next race is Disneyland. Prepare for tears, lots of pictures & a long blog about how incredible Disney was 😘